A little while back I took some photos of me wearing my recently finished Four Frock Coat. 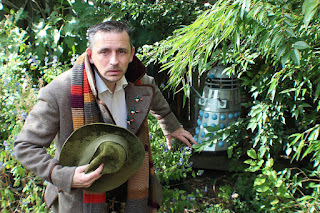 It’s great fun to mess around wearing a costume like this - makes you feel the part.
But when it comes to Tom Baker costume photoshoots, Bob Mitsch is the Master - or should I say Doctor - at it!

Let’s face it, it was only a matter of time before he wanted one of these coats, and now I’ve made him one, he’s bee having fun getting his photo taken - posing like a a good un!

He’s still getting his costume together, and by Gallifrey One next month will have the waistcoat, better trousers and the all important episode specific brooch!

I can’t wait to see how he looks when it’s all done.

Posted by Steven Ricks Tailoring at 22:27 No comments:

Last month I gave the low down and my opinon on the Fourth Doctor coats on offer on eBay.

I had a lot of comments about the reviews, so I thought I’d take a look at some other options out there.

At present Baron offer a number of Doctor Who related clothes, of which there are two Fourth Doctor costumes. 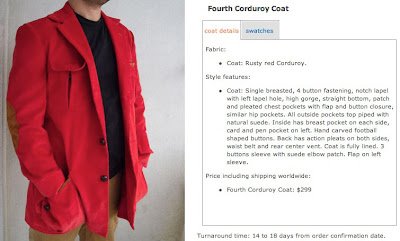 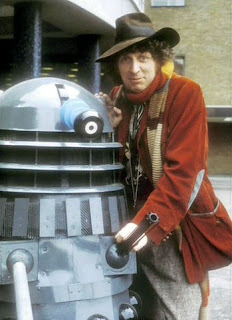 This corduroy jacket is a copy of Tom’s first costume from series 12.

Straight off the colour - which is too bright and garish compared to the screen worn jacket - is way off.

From the swatch it appears to be the right sort of corduroy fabric, though I cannot confirm this definitively.

It’s a great shame they are using the correct fabric, but not the correct colour. A little more work could have lead them to the right shade of red.

Corduroy is traditionally made from cotton, so takes well to dyeing. I am not sure what they have used for the elbow patches or pocket trim, but if they are synthetics it would be theoretically possible to over-dye the jacket to a better colour, but great care should be taken if this is attempted.

So, ignoring the shortcomings of the colour, let’s look at the structural details on the jacket itself. 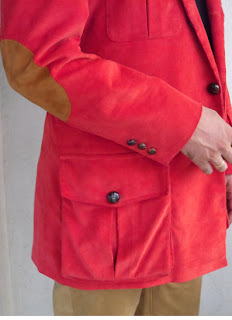 The jacket has large patch-pockets, with an inverted box-pleat up the centre, edged at the top with a brown trim, possibly leather. A flap above the pocket is closed with a leather football button.
This has been very competently replicated here, though the buttons are too dark.

The sleeves have charcoal leather elbow patches, but light brown suede ones have been used here.
My impression is the sleeves are too narrow and trim. They look a lot looser on Tom. 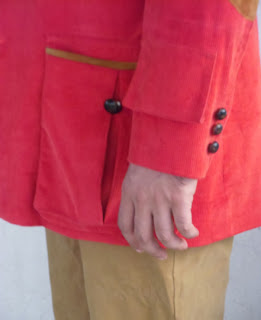 On the original jacket there is a curious flapped pocket on the forearm close to the cuff.
I have not established what this pocket is for, but the jacket is based on a shooting jacket, so could be an ammunition pocket or the like.

The Baron jacket has a token flap on the sleeve, but it looks twice the depth of the original and has no pocket underneath.

The back of the jacket is okay, but I feel the inverted pleats are are little skimped compared to the original jacket.

The collar and lapels are pretty standard, and cut well on the Baron jacket. 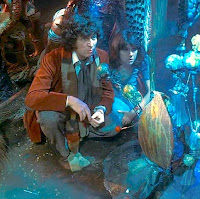 Overall it’s a pretty good effort, though personally I feel it lacks the bagginess and character of Tom’s jacket. Baron’s work tends to be very crisply cut and slimly fitted - which is a bonus for anyone seeking a Tennant Suit, but on this occasion it goes against the finished appearance.

If a better colour fabric was used, or it could be over-dyed, it would look ten times better. Asking for a looser fit, or simply giving measurements with a couple of extra inches here and there would help to. 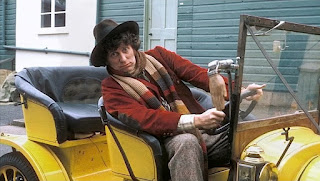 Where machine washing a jacket such as this would ruin the shape, on this it might be an idea to slacken off its tight line. 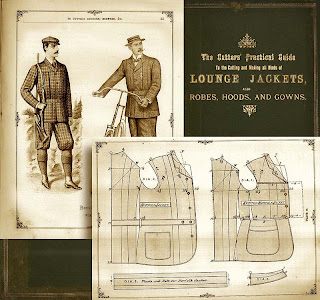 As a casual jacket it would be fun to wear.

I might even have a go myself at some point. I’ve seen some period Edwardian patterns in my cutter’s guides.
Posted by Steven Ricks Tailoring at 10:21 No comments:

Today I wanted to share with you a little eBay purchase I’ve made recently, which is a throwback to the 1970s and my childhood.

I’ve been looking around for a couple of props to pull from the excessively large pockets in my Tom Baker coat while attending conventions and events. I need something amusing, trivial and retro - and preferably something Fourth Doctor appropriate.

I can remember reading Doctor Who Weekly from its very first issue in 1979.

Two enduring memories are the Mr Bellamy adverts which hogged the colour back cover, depriving us of another precious colour photopage; and the comic-strip style advert for the TARDIS Tuner. 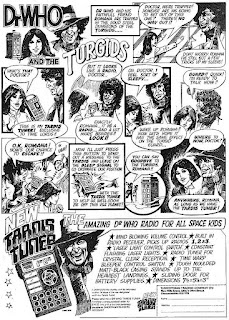 Made by Shortman Trading, The TARDIS Tuner was a Doctor Who branded toy which seem to be perpetually pushed in Doctor Who Weekly.

Essential just a medium-band radio in a chunky black plastic casing with a circuit that makes a series of lights flash and sounds beeps and bops, it looks way more exciting than it actually is.

It bears no relationship to anything seen on screen and stands alone from anything Who-related at the time.
According to the advert the Tuner boasts:

A working mint condition Tuner in its box with instruction leaflet can command around £100, often more. 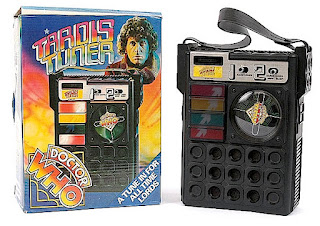 But for what I wanted one for, an unboxed not mint, but working, I paid a fair price for it.

Ironically I never owned one in the 1970s - though not for want of desiring one - it was just outside of my financial grasp at the time, so getting one now is like a childhood dream come true!

I’m looking forward to the right moment to whip it out! Wink, Wink ;)
Posted by Steven Ricks Tailoring at 21:45 No comments: