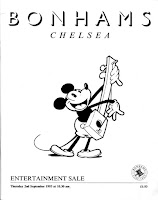 I came across this vintage Bonhams catalogue dating from 1993.

In my research into sales of Doctor Who costumes and memorabilia at historical Bonhams auctions, I don’t think I’ve seen quite so many Who-related items in a general sale before - 75 items in total, most of which are costume.

Catalogues in those days were sparsely written, often containing typing errors and misattributions. Hence you will see Sontarin (not Sontaran) and Androzanni (instead of Androzani).
Other instances cite the wrong episode titles; wrong seasons; and occasional wrong aliens! 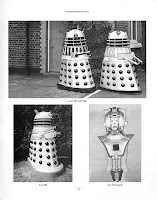 I have therefore NOT attempted to correct any of these as it is not always possible to fathom the ambiguous nature of some of the listings.

Where possible I have used the (few) photos from the catalogue to illustrate the items, but most I have sourced images from either episodes cited, or later Bonhams auctions where it would appear these items resurfaced for sale.
As usual I have separated the items by Doctor era, and you can see the rest of the items here: 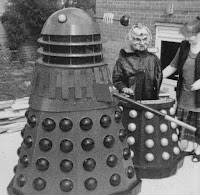 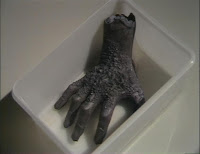 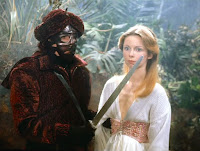 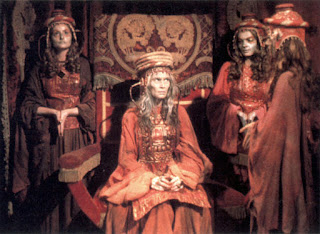 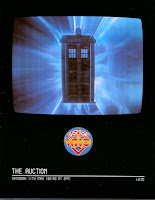 Lot 498 DR. WHO - THE AUCTION, CATALOGUE
From 11th May 1991 Sale of selected costumes from the wardrobe, 41 page catalogue with black and white illustrations, colour cover, together with a sheet of prices realised. (2)
Estimate £10 - 20

Lot 503 A ‘DALEK’
A black ﬁbreglass replica Dalek with good roundels built to a very high standard, all to original Dalek modiﬁcations and dimensions.
Estimate £1,750 - 2,250

Lot 504 A ‘DALEK’
A replica Dalek scratch built to a very high standard, realistically modelled in wood and ﬁnished in grey and black.
Estimate £800 - 1,200 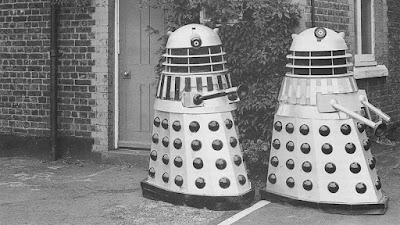 Lot 505 A ‘DALEK’
A Dalek made of ﬁbreglass/ wood/ aluminium running on castors, approximately 5ft. in height, circa 1975.
Estimate £2,500 - 3,500
Thought to have been created by B.B.C. Enterprises for exhibition purposes at Blackpool/Longleat. Vendor acquired this Dalek sixteen years ago from a Radio Merseyside D.J. at a cancer charity beneﬁt; ever since then used it at many Dr. Who Conventions around the country.

Lot 505a A ‘DALEK’
Scratch-built to a high standard and realistically modelled and ﬁnished in green and black.
Estimate £400 - 600 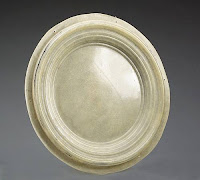 Lot 512 LONDON POLICE BOX (T.A.R.D.I.S.)
A blue London police box, complete with beacon on the top, built of wood, to the same dimensions and appearance of the B.B.C. TARDIS (Time and Relative Dimensions In Space) featured in regular episodes of Dr. Who.
Estimate £2,000 - 3,000