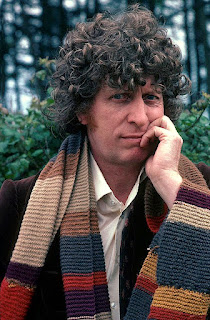 This week my Fourth Doctor costume index reaches season sixteen, the fifth year Tom Baker was in the role.
Last season the serials were run drastically out of recording sequence. This year, aside from the first two adventures, all serials were shot in their broadcast order.

Costume-wise things really settled down with this season, with only some variation coming in towards the end.

The extra wide scarf knitted in off-colours was ditched to be replaced by the two previous scarves crudely joined together to create a single one of monster length, along with the flamboyant cuff boots it makes the costume an exaggerated caricature of itself.

Today in the post I received a little pressie I bought for myself, which proved to be a timely arrival. 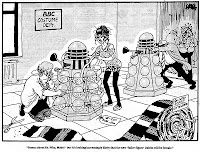 I showed you the Doctor Who inspired cartoon by Tony Hall in the Eastern Daily Press earlier this month. Above the cartoon I noticed a caption saying that the originals are available for sale. So I contacted the paper and luckily the artist still had his artwork and was willing to sell it.

Here it is.
Just need to find somewhere to put it on my wall. 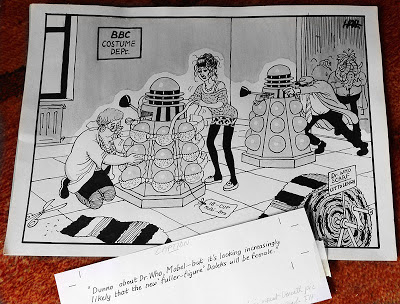 Posted by Steven Ricks Tailoring at 18:34 No comments:

This week I come to Tom Baker’s fourth season in the role.

From the point of view of the costume changes, this season is a bit confusing as it was shot drastically out of order. This was done to allow the permanent inclusion of K-9 after only intending to be a one-off character.

However, this lead to some continuity anomalies, especially for Leela’s look which was updated for Image Of The Fendahl (see right). Since the following episode (The Sun Makers) was already shot with the original costume, a scene at the end was added with Leela returning to the old look (see far right).

The Doctor wore his grey frock coat for the first three serials to be recorded, then the velvet one for the rest. By flipping the third and fourth adventure before broadcast, it makes it look like he chops and changes.

The introduction of a different scarf for Image Of The Fendahl also becomes messed up when the already shot The Sun Makers is shown after it, using the older version.

READ MORE
Posted by Steven Ricks Tailoring at 11:43 No comments: 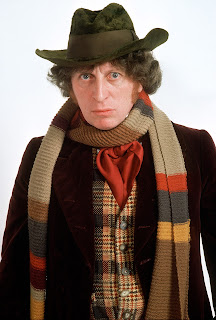 Tom’s third season in the role saw some developments to the costume and how it was worn.

At times it was more flippant with the scarf draped in differing ways, dependant it appears on his mood.

The trademark fedora hat was often left behind and at the end of the year he discards the costume all together. 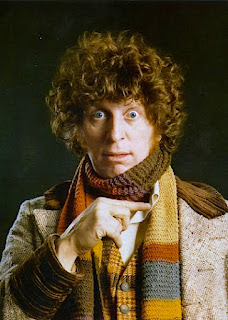 We come now to Tom Baker’s second season as The Doctor, and as the stories progressed we start to see his costume develop and expand into a wardrobe of clothes rather than a single set outfit.

By halfway through the season we shall see the emergence of the frock coat - an iconic look that will be followed through in subsequent regenerations.

Had to share this cartoon from the Eastern Daily Press, the local newspaper for the Norfolk area.

“Dunnno about Dr. Who, Mabel – but it’s looking increasingly likely that the new ‘fuller-figure’ Daleks will be female.”


Posted by Steven Ricks Tailoring at 14:29 No comments: