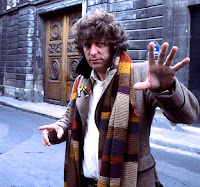 After making a number of frock coats recently (the Five Coat, and a Bespoke one for my client Ian in Australia), my next goal is to make a Season seventeen Tom Baker Frock Coat.

It may prove to be a bit of a long-term project as I am running a number of other items at the moment, but I’ll get there!

My route will be a bit round the houses, but the journey will be worthwhile as I will be learning some new skills along the way, specifically pattern grading.

A while back, when I gained access to the Original Six Frock coat and costume, I was also able to see and take photos of the Romana Pink Frock Coat as seen in Destiny Of The Daleks. (see below) 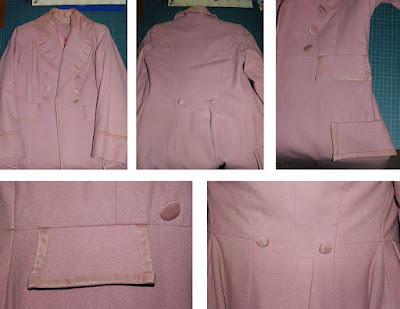 It was a surprising costume piece to look at, as it wasn’t entirely what I was expecting. For me, Lalla Ward’s Romana was always feisty character, but a with a delicate and playful sense of fashion. The Pink Frock Coat has a very girly look to it, so I was surprised to find it was made from quite a coarsely woven wool.
Interestingly this matched a couple of the fabric types used on the Six Frock Coat, so if I found a match for it I would kill two birds with one stone so to speak.

This, however, is only the beginning of my plan. 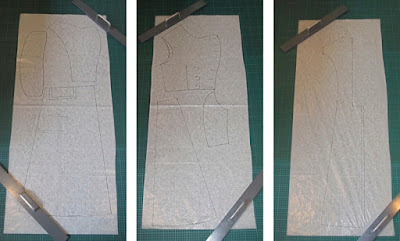 While I had it on my bench, I took the chance to get a full pattern trace of the coat, breaking it down into its constituent parts (see above). 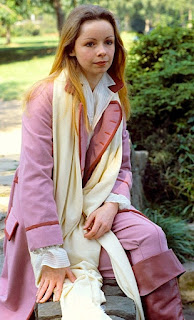 The Romana Frock Coat was a parody of Tom’s costume, and was accompanied by a long white scarf, britches and boots (see left).
The coat had been cut to almost entirely the same pattern as Tom’s with only a couple of subtle differences, so this was a great opportunity to crib the correct shapes, if in the wrong size.

Lalla Ward is very petite lady, so there is no way the coat fits me! It didn’t even fit on my mannequin on it’s smallest setting. So despite having cribbed the pattern, it is of little direct use. What I will have to do is size it up from Lalla’s to Tom’s size. This process is known as pattern grading.

Pattern grading is something I have never done before, and I am thinking it is quite a skilled process to go through, so I am working with my college tutor to learn how to do it, using the Romana-to-Tom Frock Coat as a working example.

This is gonna be fun!
Posted by Steven Ricks Tailoring at 21:06