Scarf improvement at The Experience

A week or two back I returned to the Doctor Who Experience at Olympia as I had heard there had been some revisions and additions to the displays.

Most of the additions, naturally, are relating to the current season, but the revisions are mainly centred around Tom’s costume. 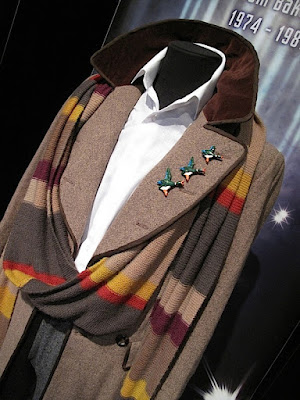 When the exhibition first opened back in February, the scarf on display was apparently two of the promotional scarves issued by the BBC during the Fourth Doctor’s era.

The colours and design is pretty good, but it wan’t quite right. 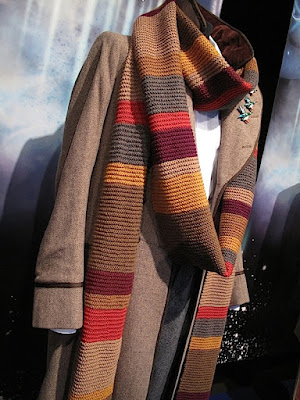 Well now there is a new, much improved scarf on the display.

I gather the scarf has been knitted by a fan who knows the exact pattern and colour match for the yarns.

The garter stitch is much deeper and more noticeable than before.

Further on in the exhibition I spied another Tom Baker scarf which wasn’t there before . . . 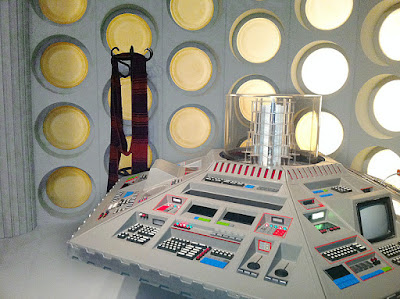 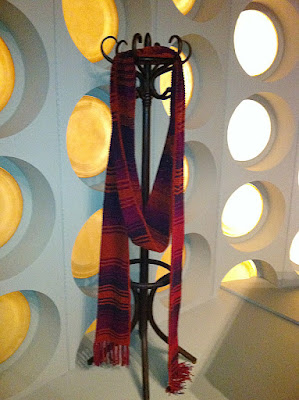 In the background of the classic series console room is now a coat-stand with the Season 18 scarf hanging from it.

I don’t mean to be picky, but the scarf is a bit anachronistic, since the console on display didn’t appear first until season 20 for the anniversary story, The Five Doctors, so Tom never was seen on this set.

Either way it is a welcome addition to the exhibition.
Posted by Steven Ricks Tailoring at 19:09