So, after a number of lack-lustre auctions, it finally looks like Bonhams has a genuine challenger to their Entertainment Memorabilia sales.

PropStore.com have been selling high-end props and costumes for sometime now, including the occasional Doctor Who piece.

But this month they are holding a live auction at the BFI IMAX cinema in Waterloo - for all intents and purposes a Bonhams style auction.

there‘s some amazing stuff on offer, from Mr Spock’s costume from classic Star Trek, to costumes from Back To The Future, the Alien and Star Wars films.

And unlike the last couple of years of Bonhams auctions, there are is a good spread of quality items on offer to attract the interest of the dedicated Doctor Who fans out there.


Here are just the lots relating to
the Fourth Doctor 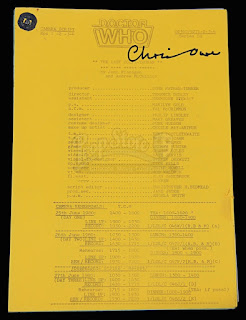 Lot 94
“Meglos” Production-Used Screenplay
A production-used screenplay from the BBC sci-fi television series Doctor Who. The screenplay is from the second serial of the eighteenth season titled “Meglos.” Written by John Flanagan and Andrew McCulloch, it consists of more than 100 unannotated pages printed on multi-coloured A4 paper and held together with a large metal split pin. It is signed by Christopher Owen who played the role of the “Earthling” in each of the serial's four episodes. Slightly worn from use, the script displays minor tears on the front page. It remains overall in good condition. Dimensions: 30 cm x 21.5 cm x 2 cm (12” x 8 ½” x ¾”)

The costume features a chamois leather mini-dress with matching underwear, a pair of arm wraps, a leather belt with matching hip pouch and a pair of wedge heel leather boots. All of the garments feature thick faux-stitch detailing to give them the appearance of being crudely made with an array of stitches created using black and grey wool running down the front, sides and back of the dress. The costume pieces are fastened using leather and cotton laces. A replica knife and leather scabbard complete the set.

Distressed for use with carefully applied dirt, stains and grime, the costume displays some signs of wear from use and time spent in storage, including creases that can be matched on screen and rust stains from corroded steel eyelets. The costume remains overall in very good condition.

Lot 96
Leela's (Louise Jameson) Blowpipe
A blow pipe used by Leela (Louise Jameson), companion of the Fourth Doctor (Tom Baker) in the BBC sci-fi television series Doctor Who. The prop was used for scenes in the show’s fourteenth and fifteenth season where it was used to fire Janis thorns that immobilised foes.

The prop blowpipe is made from a thin metal tube which has been painted to give the effect of wood. A thin length of frayed string wraps around the pipe and is secured at both ends with glue.

There is a painted ring of foam attached one end of the pipe with white and orange feathers glued just below it. The pipe displays light signs of wear as a result of age such as small chips to the paint. It remains in very good condition. Dimensions: 31 cm x 5.5 cm x 5 cm (12 ¼” x 2 ¼” x 2”) 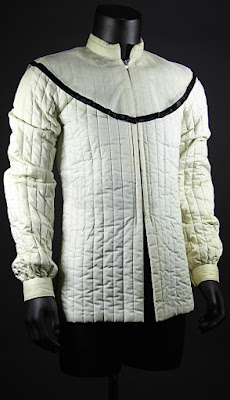 Made of white material, the jacket features a synthetic mesh lining and collar, black trim detailing and a zip-up front. A handwritten label marked “Crawford” is attached at the collar. The boots are made of leather with tie-up nylon tops. 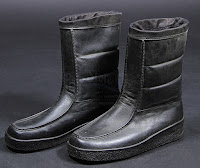