Dressed By Angels - the full tour

This week I took a little bit of well earned time off to go and visit an exhibition in London’s East End.

It was a display of costumes made by Angels Costumiers, the world’s largest single costume maker and supplier to film and tv in the UK, as well as around the globe.

Through the years, and a series of take-overs, they have amassed an archive of costume from some truly great films, so I knew this exhibition would be worth the trip.

It goes without saying there is a bit of Doctor Who on show, so I not entirely off duty!

I will do a separate posting about the Doctor Who display to do it justice, so what I have written about below excludes this, plus some stuff I am not personally interested in.

When I bought my ticket online I noticed there was also an opportunity to go with a tour guide to show you around and give some background information on the displays. I therefore booked for today’s 11am tour.

The venue was somewhat hard to find - in fact it is hidden away in an alley off Brick Lane, then down stairs into a basement of what was once a brewery.

I guessed it would be a bit tricky to locate, so I did allow some extra time for my journey, which actually meant I had time before the official tour to have a nose round on my own to see what was on show. 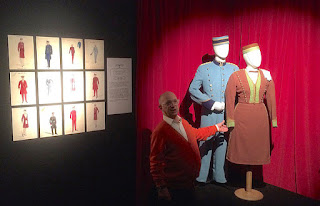 As we moved past the early days of costme for Victorian music halls, we came to a display of 1930s usherette costumes.

These were made by Angels for the cinemas sprouting up across the UK at the time, making visiting them a more eventful and special experience. 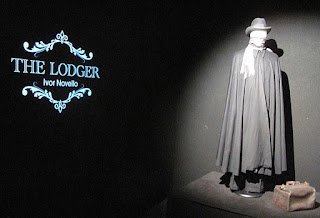 Moving on we came to the early days of film, with the cape, hat and scarf from The Lodger, one of Alfred Hitchcock’s earliest silent movies. 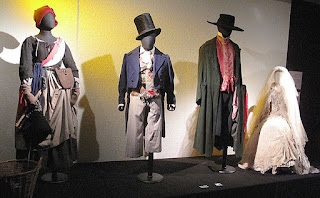 I was amused to see the trousers of the Artful Dodger were made from pillow ticket, in just the same way The Sixth Doctor’s were. 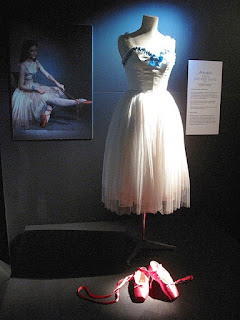 We then came to the first of my childhood influences - The Red Shoes.

It was stunning to see the actual shoes and ballet dress on show. I had never seen them before. 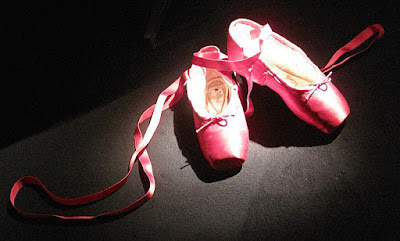 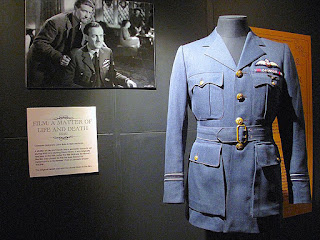 Next to The Red Shoes was another Powell and Pressburger classic, A Matter Of Life And Death. This time the RAF uniform worn by David Niven for the film. 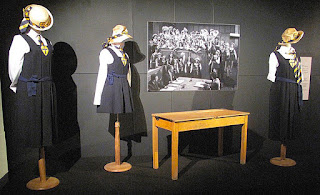 Moving to the 1950s, we then saw costumes from the classic St Trinian’s films, always a favourite of mine.

Alongside this was a display of various armed forces uniforms from the likes of Band Of Brothers etc. 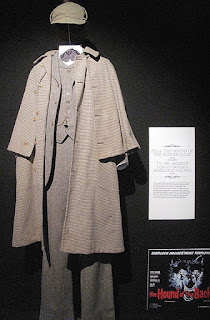 Not far away was a composited Sherlock Holmes costume, made up in part of an Inverness cape worn by Peter Cushing in the Hammer Hound Of The Baskervilles, as well as a suit underneath from the 1968 BBC version.

This was next to a glass cabinet containing Peter Sellers’ tweed hat and moustache from his Pink Panther films of the 1960s and 70s. 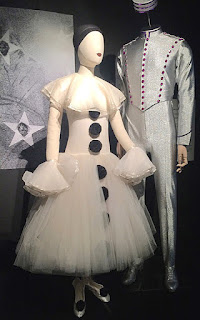 I was then stopped in my tracks to see costumes from The Boyfriend - a Ken Russell film of the early 1970s which inspired much of my love the how film is made.

These costumes were worn by lead stars Twiggy and Christopher Gable (of Caves Of Androzani Fame). 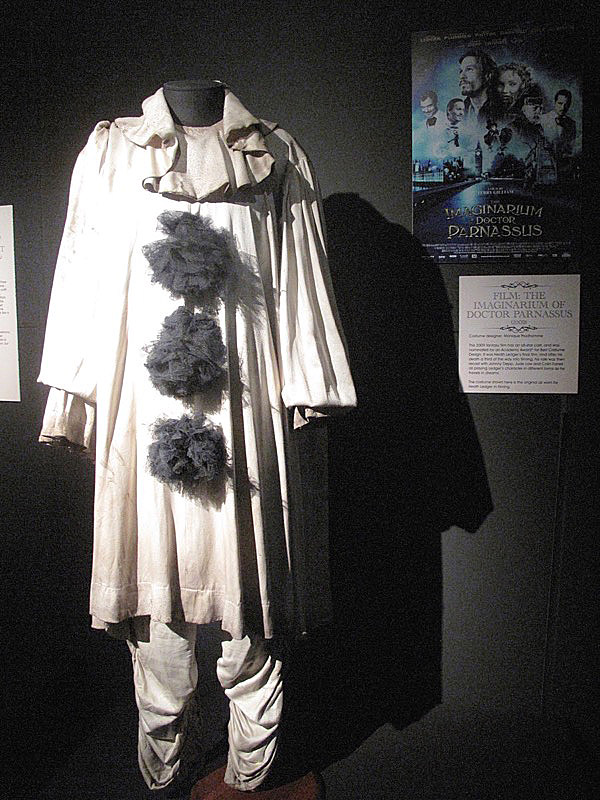 Next was Heath Ledger’s last costume as he worn in The Imaginarium Of Doctor Parnassus. 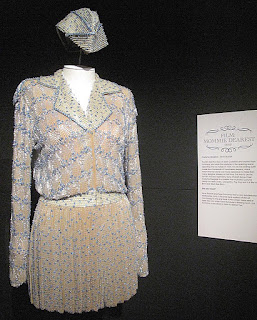 Followed by Faye Dunaway as Joan Crawford from the biopic Mommie Dearest. 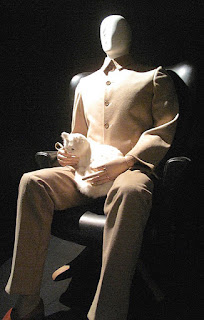 Sitting in a chair opposite was Ernst Stavro Blofeld as depicted in You Only Live Twice, complete with white cat.

That particular bond film was screenplay by Roald Dahl, as was Chitty Chitty Bang Bang, another Broccoli adaptation of a Ian Fleming novel. 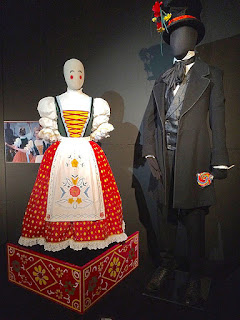 Moving on, I came to something else that scared the life out of me as a child - Dracula, as played by Christopher Lee in the many Hammer films he did in the 1960s and early 70s. 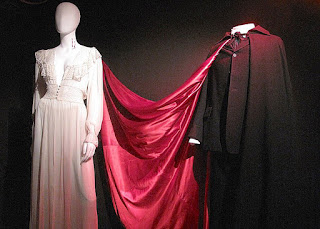 This, like many of the other displays, is quite wittily done. The blank faceless mannequins are dotted with occasional make-up references, and this one has the fang marks and blood from the maiden’s neck! 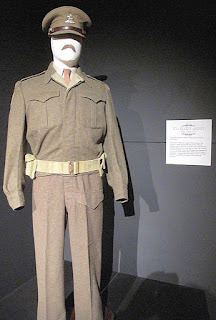 Separated off into a small room was a display of various BBC comedy programmes from the 1970s and 80s.  Here was Manwearing from Dad’s Army (also the upcoming film version); Margot Ledbetter from The Good Life; as well as the Batman and Robin fancy dress outfits from Only Fools And Horses. 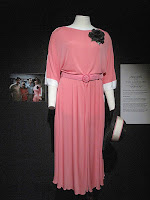 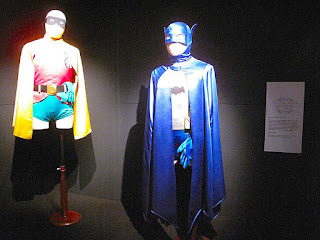 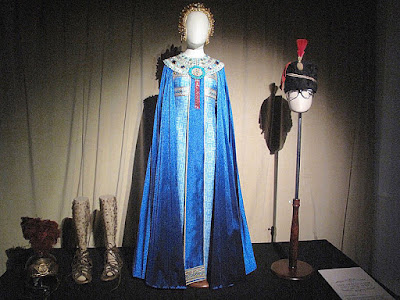 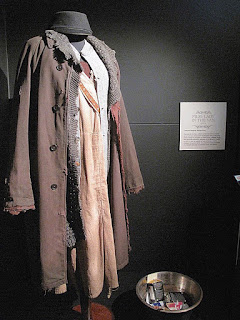 Bringing things more up to date were costumes from The Lady In The Van, and A Theory Of Everything.

These are good examples of modern period pieces, and how costumes are often newly made, but broken down to age them prior to filming. 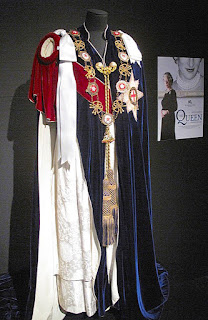 As part of the modern period display there was also robes worn by Helen Mirren as The Queen; as well as Margret Thatcher as played by Meryl Streep in The Iron Lady. 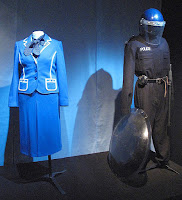 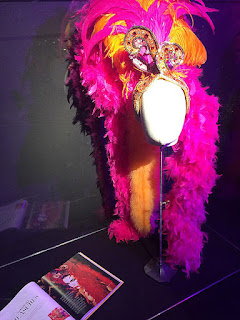 Moving into the world of pop music, there was a flamboyant head-dress worn by Annie Lennox for her Diva solo album. This I found out had originally been made for the Roger Moore Octopussy Bond film. 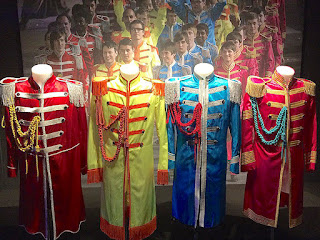 Another 80s favourite of mine, Adam Ant, was represented by his ornate military tunic. This had been made for The Charge Of The Light Brigade.

Also here was a set of Sargent Pepper tunics, but these came from the opening ceremony. 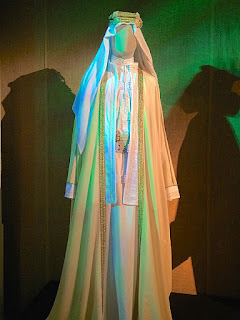 On show were costumes from a variety of Oscar winning films. These included Peter O’Toole as Lawrence Of Arabia; Russell Crowe’s leather uniform from Gladiator.

Also here was Harrison Ford’s Indiana Jones outfit and Alec Guinness as Ben Kenobi from Star Wars, and a montage from Titanic. 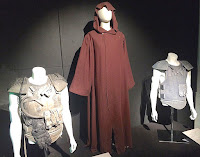 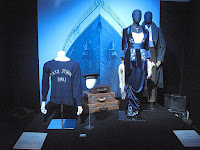 All in all it is quite a good exhibition, covering many popular films and tv shows. There was space for more stuff, so it was disappointing it hadn’t been filled as well as it could have been. That said every piece was worth seeing and with the photo displays alongside you could clearly see everything was original and screen worn.
Posted by Steven Ricks Tailoring at 15:42