This week I’ve been taking a little look at an area of The Doctor’s costume that sometimes gets overlooked: The Costume Transition Scene!
I’m taking about that moment in the first episode of a new Doctor where the old skin is finally shaken off and a re-designed costume helps define the start of a new era in Doctor Who history. 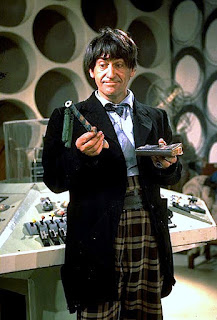 When William Hartnell became Patrick Troughton, it wasn’t just his face that changed – his costume miraculously regenerated at the same time (see left).

Later, when Jon Pertwee took over, his new clothes were more realistically introduced by having The Doctor lift them from the changing room of the hospital where he is taken at the start of Spearhead From Space.

But it was Tom Baker’s transition scene that was the first to make some play on the anticipation of what The Doctor would be wearing.

Looking through the list of regenerations, I have realised there seems to be two dominant scenarios for these scenes:

The Third Doctor steals the clothes of a hospital consultant before stealing his car as well; after the Eighth Doctor emerges from the morgue, he takes the clothes of a surgeon, who is going to a fancy dress party; the latest regeneration sees the Eleventh Doctor lifting a the parts of his costume from the hospital locker room as he strides through.
The TARDIS Dressing-up Room scenario 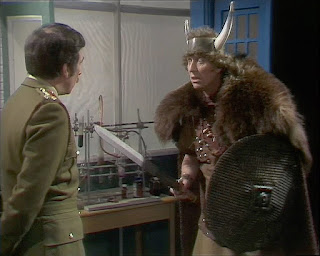 After entering the TARDIS having skipped his hospital bed (I see a pattern emerging here . . .. ) he comes out in a viking outfit, complete with shield, sword and horns (see right). 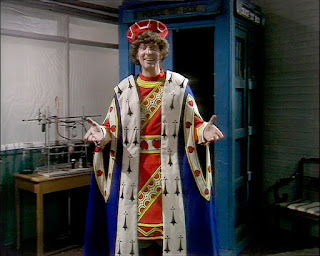 Then he comes out dressed as the King of Hearts!

This got me thinking as to where this costume had come from.
They wouldn’t have gone to the trouble and expense to make it specially, so it must have come off the rack at a film costume suppliers – probably Angels.

The episode was shot in 1975, and I had a brainwave that there had been a big-budget film version made in 1972 with an all-star cast.

Luckily I have it on DVD, and sure enough, it turns out that The Doctor is wearing the King of Hearts costume (see above, right in picture), though with the hat worn by the Knave of Hearts (see above, centre in picture) – who, ironically, was played by Rodney Bewes who later appeared in Resurrection Of The Daleks. 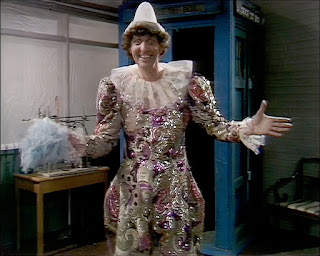 Anyway, back to the scene . . ..
the Doctor is then seen in a clown’s outfit – not unlike that worn by David Bowie in the Ashes to Ashes video, though this isn’t that actual costume. 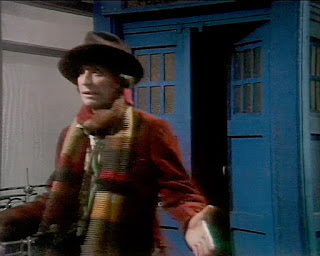 Finally after all the frivolity, The Doctor bursts out wearing his fully worked costume.

Perfect, as The Brigadier exclaims.

This costume-box appraoch was to occur again for Colin Baker (having skipped a generation) and again for Sylvester McCoy. 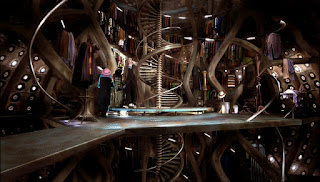 David Tennant’s transition scene is also a throwback to this, but a bit more reserved.

Posted by Steven Ricks Tailoring at 21:34