And the winner is.... Romanadvoratrelundar

This year is looking to be very successful for the costumes I have been making.

Back in February I won Best In Show for my Ultimate Six Frock Coat, and I have now learned that a number of my other clients have been strutting their stuff and winning competitions along the way. 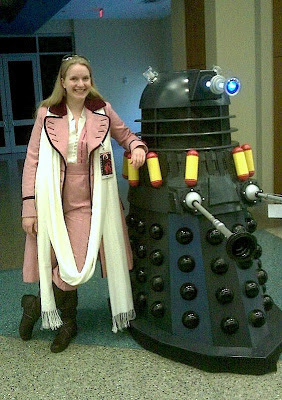 I made Claire a Romana Pink Frock Coat outfit in February, and soon after she attended a regional convention called Coast Con 36 in Biloxi Mississippi.

It’s a small general sci-fi fantasy event attended by approximately 1,200 to 1,500 people over the course of the three days.

This convention is not specific to any one sci-fi genre, so there were people from many different sci-fi platforms. 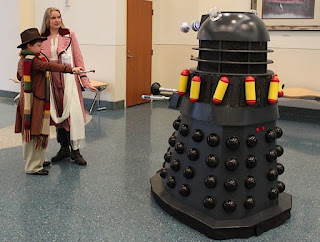 Claire attended with her little brother who dressed as a mini Fourth Doctor alongside her as the companion, which made for an interesting combination!

When he wasn’t taking The Doctor role, her brother was inside their Dalek acting as operator!

Homemade from the original plans by their grandfather, their Dalek is a curious combination of classic and new series styling, in a mid-1970s colour scheme ala Genesis Of The Daleks, with Destiny Of The Daleks grenades around the shoulders. 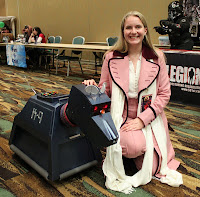 Also at the convention was a superb replica K-9 - the perfect foil for Romana.

Claire had already got her cuff boots and long white scarf as well as a suitable blouse to wear.

I made her the Pink Frock Coat and matching Pantaloons with braces to match.

Part of the convention involved a costume competition, which had several prizes up for grabs.
There was Male/Female hero, Male/Female villain, and group as well as a Best In Show. 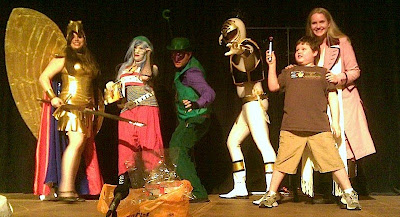 They competed and won the Group division, with Claire’s brother inside his fill scale Dalek. There was much discussion about giving them the Best In Show prize too, but the award was a six-foot sword which is not the most appropriate prize for a child to win so a $40 cash prize was given instead.

Claire’s thinking on entering the competition was that it would be a good opportunity for her little brother to have some fun and that if we won something that would just be lagniappe. 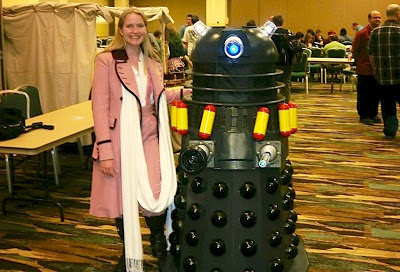 Claire told me about her costume:
As for my costume, I absolutely love it. It fits perfectly and it looks amazing. I am easily recognizable as Romana from Destiny of the Daleks. The workmanship is fantastic and I am extremely pleased with the overall result. My favorite part of my costume is the coat itself. It is the best fitting coat I have ever owned which I find astounding since you never saw me in person and did all of it off of measurements sent over email.
Posted by Steven Ricks Tailoring at 21:54