The Fourth Doctor in 50 Years trailer

This week has seen the BBC release a fantastic new trailer celebrating the full 50 years of Doctor Who.

In one way or another all eleven Doctors are represented, some only fleetingly others more visibly. 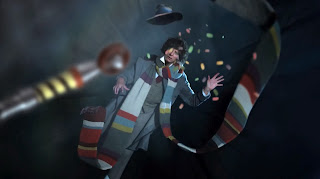 It goes without saying that the Fourth Doctor is seen quite prominently at around 20 seconds into the one minute trailer, floating around surrounded by spilt Jenny Babies and an erroneous third Doctor sonic screwdriver. 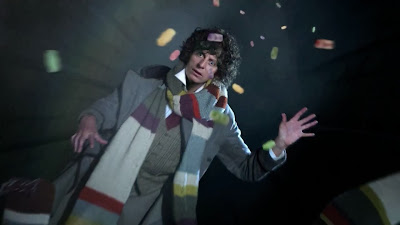 But what has stirred up some debate is the clothes The Doctor is seen wearing.
The image has been achieved by compositing Tom Baker’s face onto someone wearing the costume. 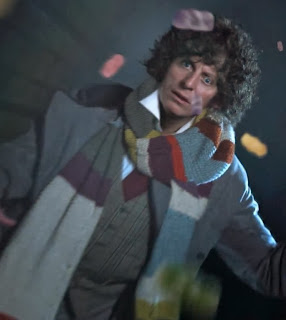 The coat is clearly the Power Of Kroll frock coat, known also for its appearance in City Of Death.

The waistcoat appears to have a tweed checked pattern, but is not the classic version he is seen in many episodes.

But the scarf, as ever, fires up the blood of the Fourth Doctor fans. It’s been suggested it was the season15 version with the pattern repeated - or even the promotional scarf which was worn for a variety of photo shoots and personal appearances.

Eitherway, that coat, waistcoat and scarf don't belong together!
Posted by Steven Ricks Tailoring at 22:18