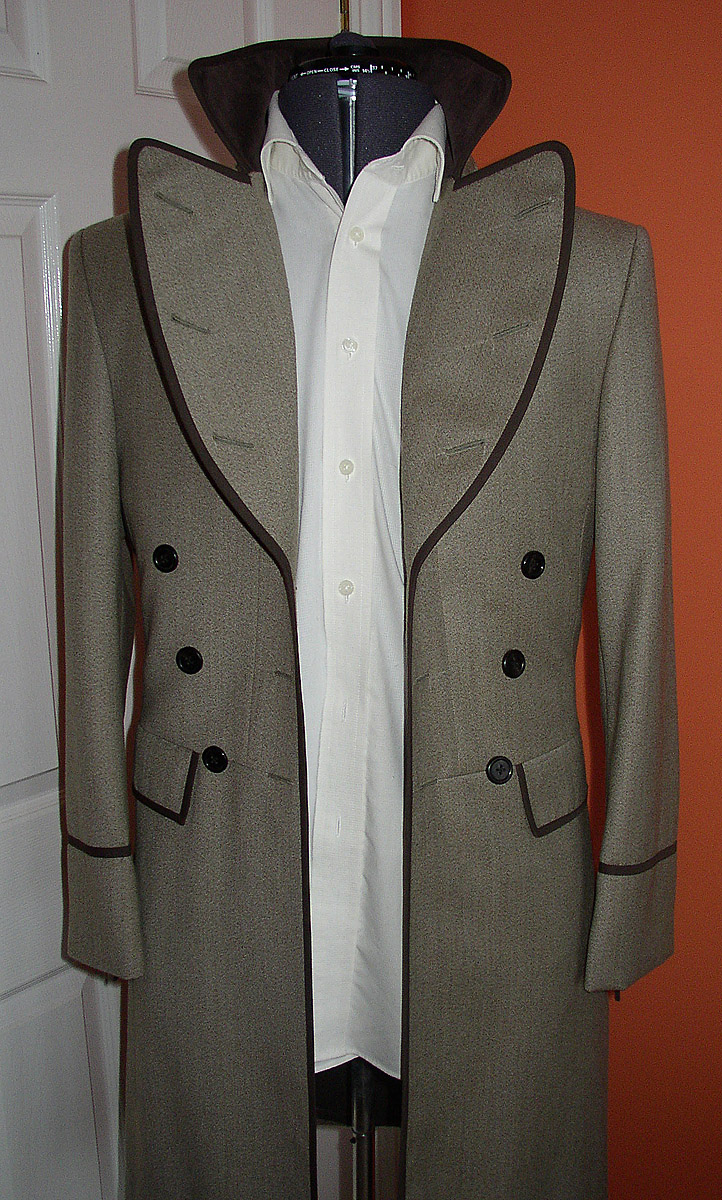 A little while back I had the chance to get my grubby mitts on one of the replica season 16 Frock Coats out there.

It was interesting to see how another tailor had interpreted the coat, and knowing the original a bit more than most, how it fared. Forgive me for being brutal!

There are a multitude of things that strike me about this coat, but the first I’d have to address is fabrics used.

Rather than the plain and flecked coloured heavy, coarsely woven tweed, a relatively thin suiting cloth has been used which for me makes the feel of the coat just wrong.

The fabric is a good quality, allegedly sourced from Holland & Sherry, a Savile Row tailors suppliers. That said, a quality fabric doesn’t make for a quality cut if the essence of the pattern is wrong. 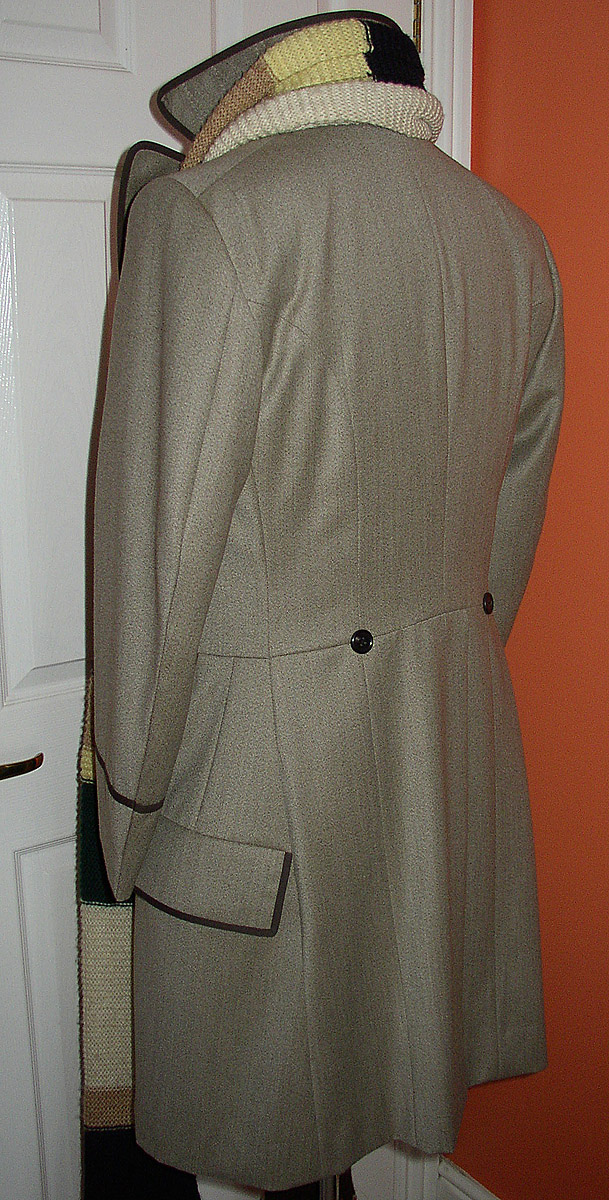 The rear of the coat is my main worry about the pattern used. A frock coat should have a continuous drape of fabric all the way from the shoulders, down between the two back buttons and through to the hem. The skirt panels should then be between the front edges all the way around to meet these narrow tails.
Here we essentially have a jacket with a skirt attached at a waistline seam running the full circumference of the coat.

It has the tails as a frock coat, but they are too wide which pushes the buttons quite far apart. The skirt is in two sections, with an aggressive dart down to the rear pockets to create some girth, but this broadens the hips rather than spreads the skirt through to the hem, thus lacking the hourglass flare that is so typical of a real frock coat.

The pattern for the upper body of the coat has one panel each side too many. Essentially the vertical seam passing just behind the rear pocket simply shouldn’t be there. 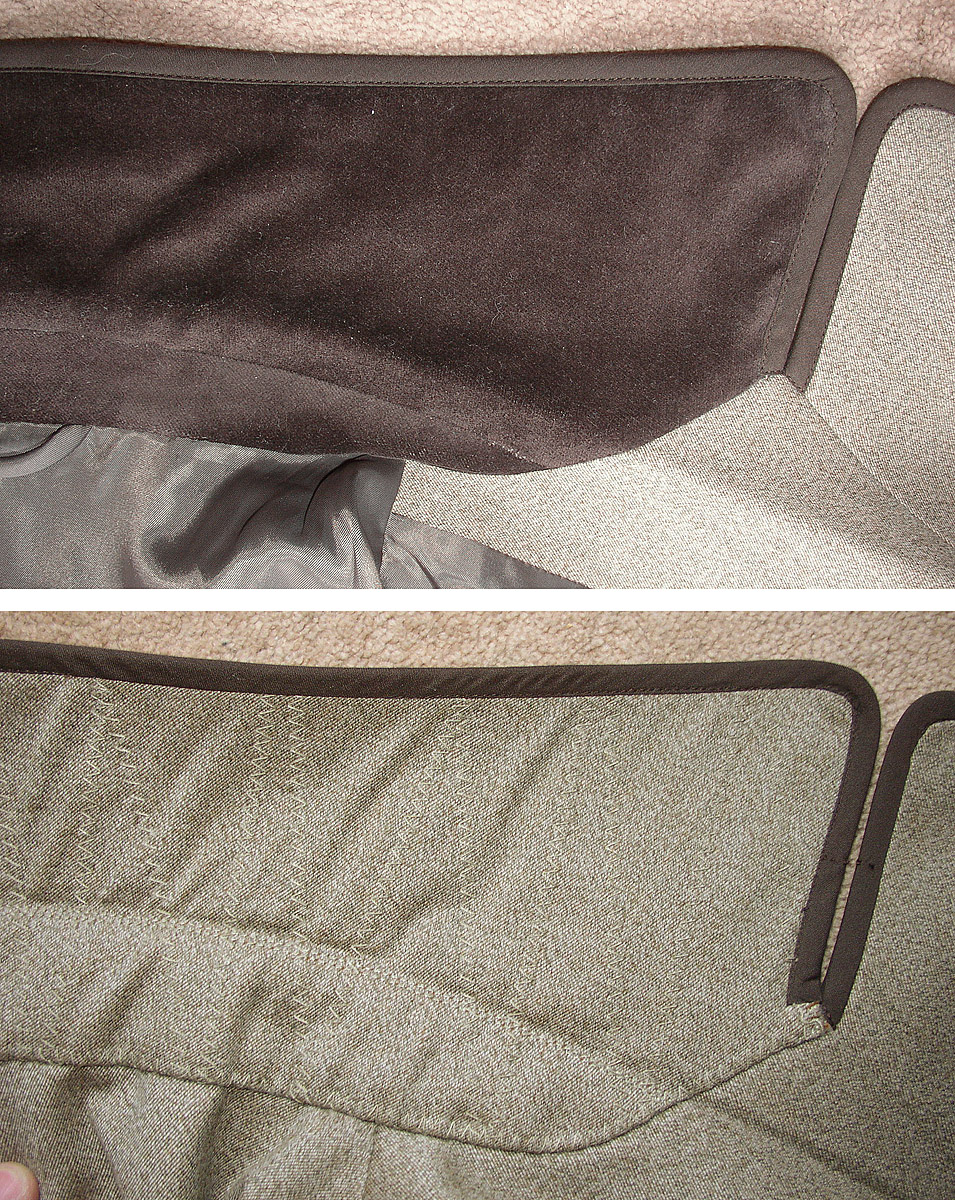 Turning to the collar and lapels, these aren’t too bad and are a good interpretation of the screen worn coat.

The placement of the buttonholes and buttons is pretty accurate, though the buttons are disappointing as they are plain plastic rather than leather.

The split lapel has been well cut, giving the front of the coat a good appearance. 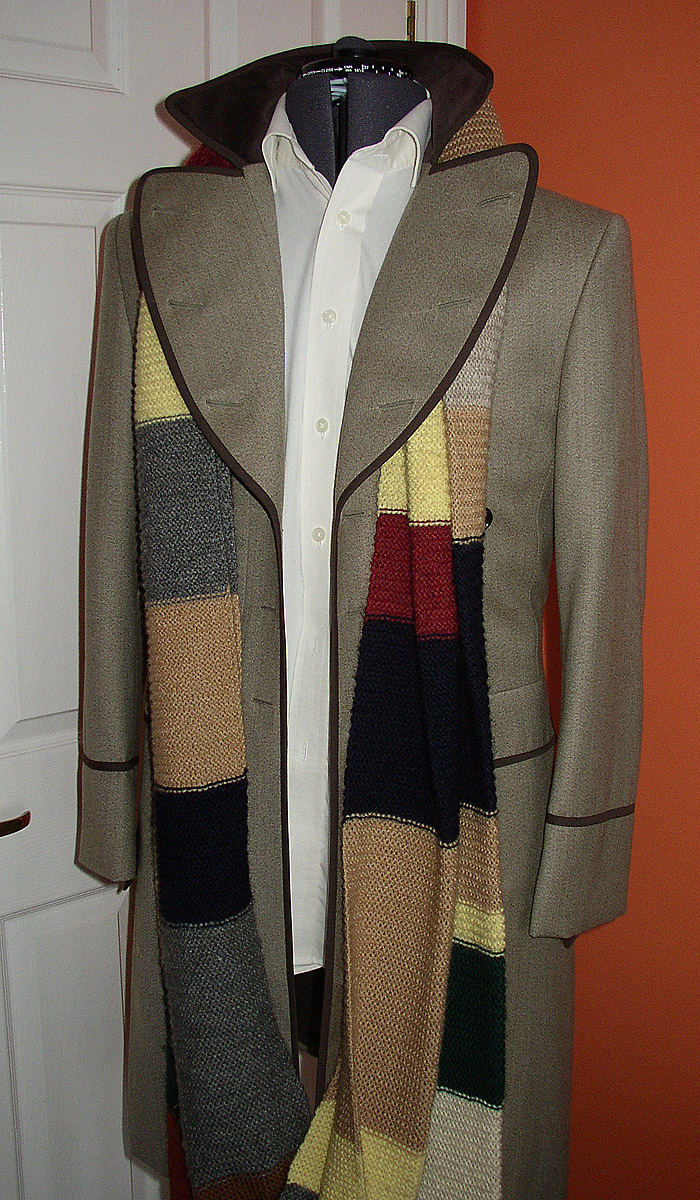 With an appropriate scarf to hide the rest of the coat (here the one my mum knitted me in the 70s) it looks not so bad.

The chocolate brown piping has been cheaply sourced and is nothing more than a cotton bias binding worth less than a quid a metre. 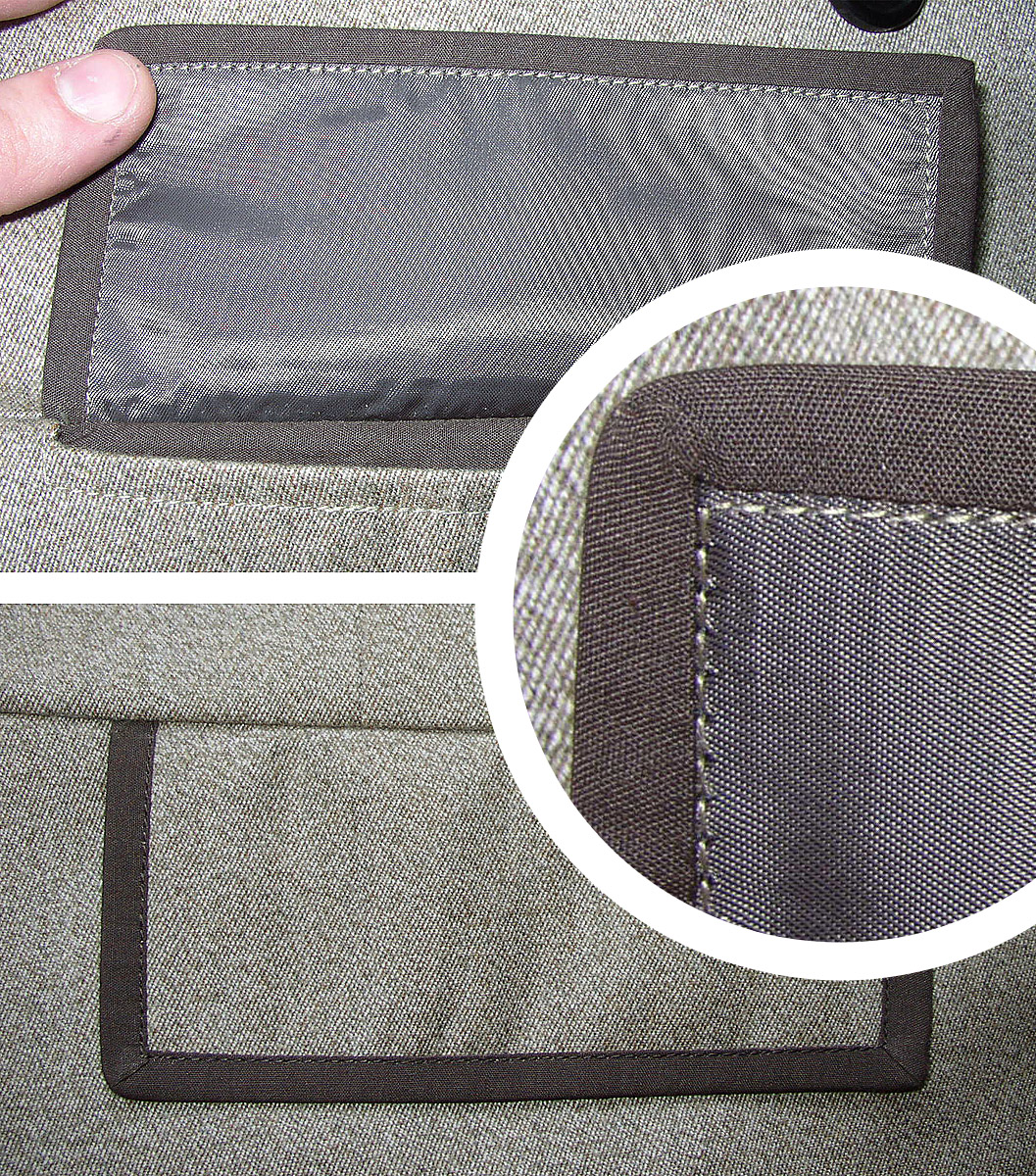 It has been skilfully applied, but I don’t like they way the visible side has a line of stitching on show, whereas the underside is overlapped to hide the stitching.

The pocket flaps are all simple rectangular shapes, lacking the characterful outward slope. It’s subtle but makes the difference for me.
Internally the coat goes off on its own tangent, making things up as it goes along. 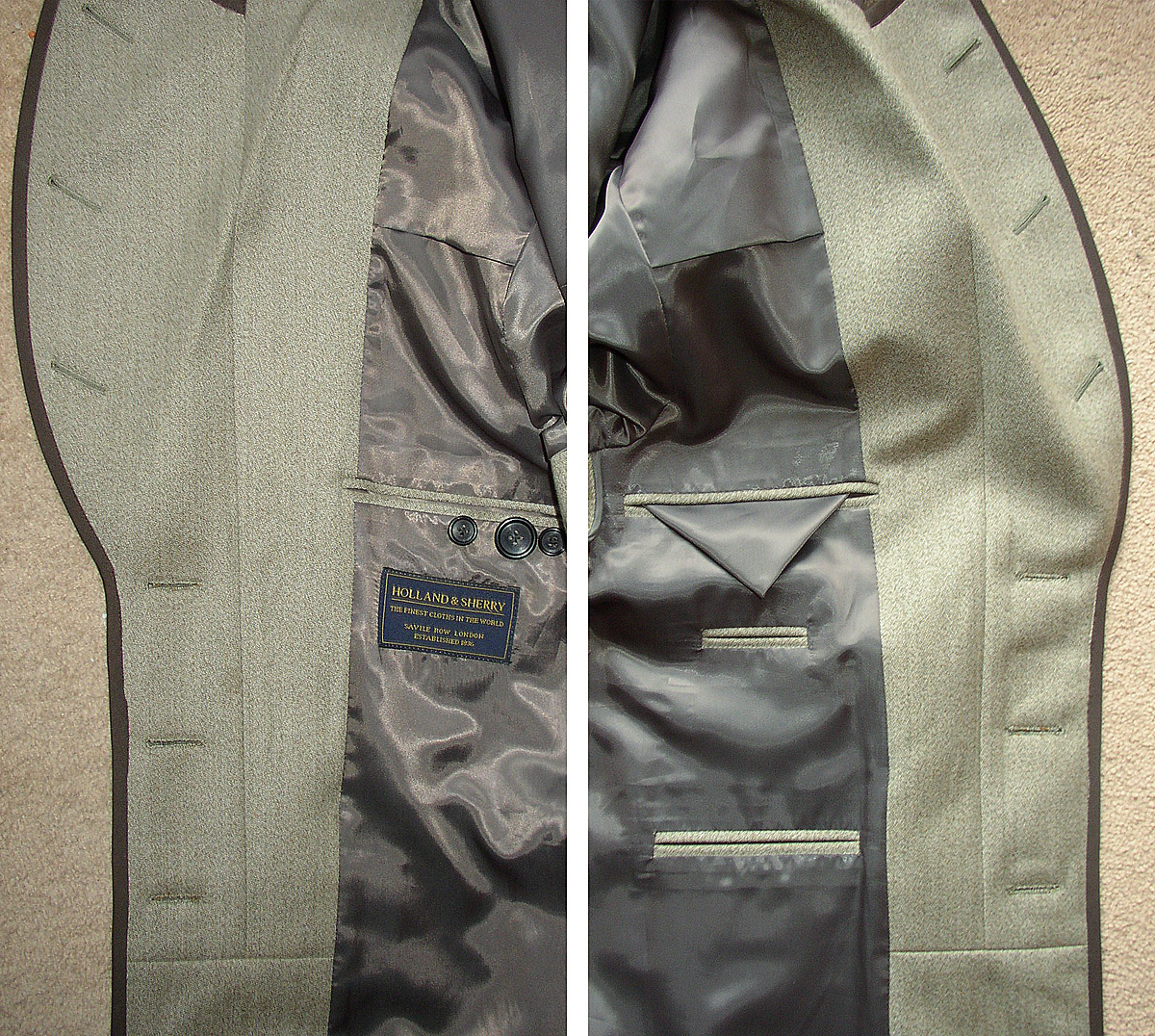 The design of the internal pockets is very typical of the Far East tailors, with a multitude of sizes and positions on offer - one on the right side and three on the left.

I’ve seen this in a number of suits originating from the orient. 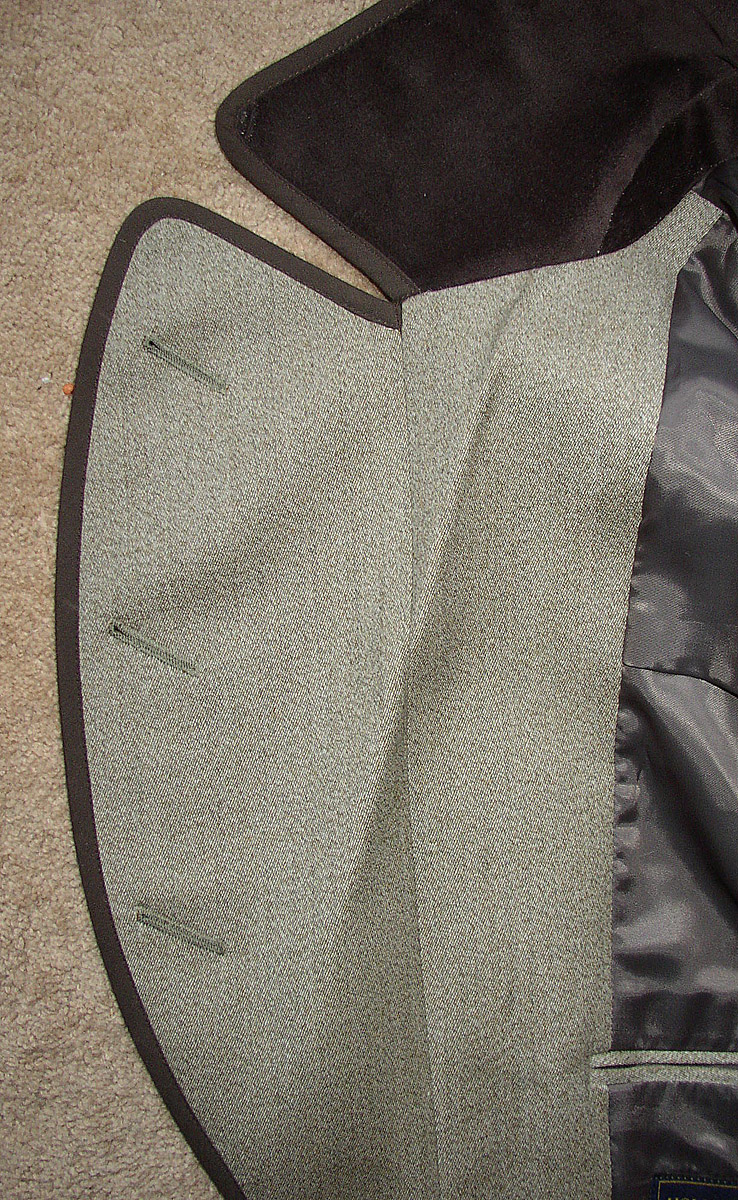 This over eggs the simplistic four patch pockets of the original coat.

The coat is very competently made (aside from a burn to the velvet on the collar point - oops) but this doesn’t make up for the failure to appreciate what it should be made from or how it is cut and drapes.

That said it could make for a good day-to-day wear that has been inspired by the costume, rather than quality screen accurate time of cosplay.
Posted by Steven Ricks Tailoring at 17:53