So there was a large, bulky package in the post today, and it was the vintage corduroy jacket I bought off eBay.

I unpacked it and I was both pleasantly surprised and a little shocked! 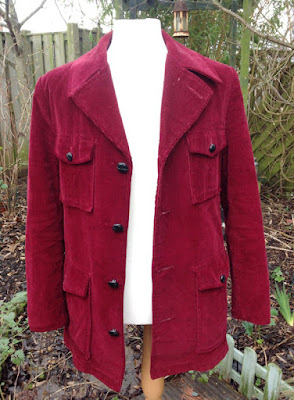 No two ways about it, looking at it in the whole it is amazingly similar to Tom’s season 12 jacket.

The first thing that struck me, and was the main shock, was the lining. 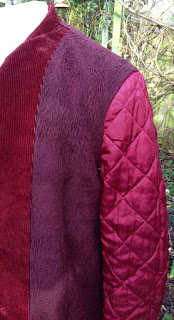 Instead of the conventional thin viscose you’d expect, it had a fleece-like faux fur! This makes it quite thick and heavy. But the jacket has been made with the lining hung and not bagged, which means it is not attached along the hem. This give me unrestricted access to the inside of the jacket to spy on how it has been made.

That said, I tried it on and it is a near perfect fit for me. The buttons are a little tight across the chest, but I’ve noticed they are set unusually far back form the edge, so I will move them by easily an inch without ruining the look of how it closes. You can see the mark the button left in its old placement (I have retouched it to show up a bit more than it did). Once steamed, this near vanished completely.

The lining also revealed its maker - Sears, the US-based retailer, and the jacket is described as being part of their Sportswear range. This was a surprise, as I’d have thought it would have been a UK-made jacket.

The sleeves are lined with and equally heavy quilted material, making the entire jacket very warm to wear.

I’m in two minds to keep the jacket as found, or to re-line it with a thinner cloth to make it more of an all year round jacket, lighter in weight and looser on the fit.

The listing on eBay did mention that there was a button missing fro the front of the jacket, which is no problem as I am sure I can find a replacement.
I had a good look at the pockets and to my surprise I found that in one was the missing button! Not only that, sewn in to the bottom hem is a spare for the front and the cuffs/pockets! 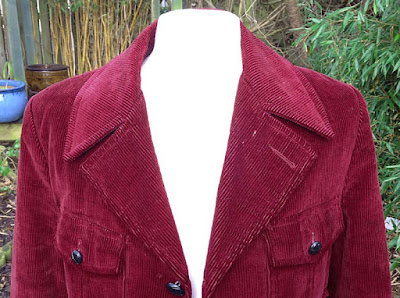 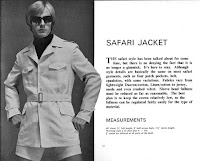 The collar and lapels are real 1970s in the style of the safari jackets of the period. Their shape remains me also of the U-boat later jacket worn by the Ninth Doctor.

The buttonhole on the lapel is cut, and practical as it connects with a small plain button concealed under the collar, making it a very snug and warm fit.

From what I can make out the construction of the pockets are exactly the same as Tom’s, though they lack a line of binding around the top edge. 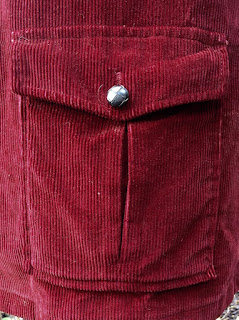 They have an inverted box pleat down the centre front of each, which is sealed for the top 2 inches. This is where the button is sewn to hold the flap down. 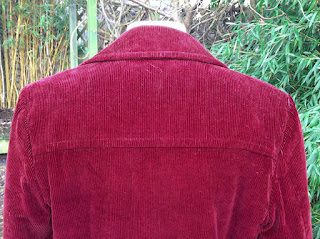 The rear of the jacket has a yolked shoulder and the back itself is made from a single piece without a centre seam. This is like a shirt rather than a lounge jacket.
This back panel is missing the two deep pleats that are visible on Tom’s version. On his they disappear into a laid-in belted back, below which there is a conventional flat back becoming a plain hem at the bottom. 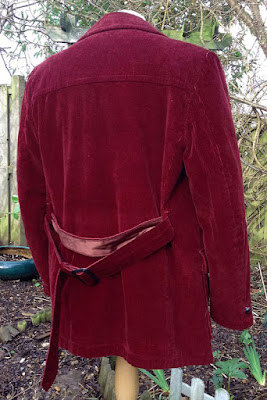 This jacket has a belted back, strung between two loops on either side.

Studying this jacket, especially how the pockets are made, will be invaluable if I ever decided create a pattern for it.

I’d be able to incorporate the changes needed to make it more screen accurate for myself or got a commission for one.

Posted by Steven Ricks Tailoring at 18:47