Now I’ve got a new place for all my Fourth Doctor costumes, I thought I’d pull together all the recent auctions that have included costume pieces from Tom’s era.
Here is the first, from June 2009.

This coming week there is an auction at Bonhams in Knightsbridge of Film and Entertainment memorabilia.

Amongst the James Bond and Beatles items (and Christopher Lee’s original cape from his first Dracula film) are a number of original Doctor Who costumes, some dating right back to the very first season in 1964.
Also on sale are three Doctor costumes; one from Jon Pertwee’s last series; Jon Pertwee’s jacket when he appeared in the Children In Need special, Dimensions In Time; and a near complete Colin Baker outfit (sadly missing the coat).

This is an opportunity I can’t miss, if not to bid, but to at least go along to the viewing and take a closer look, and maybe some decent photos.

Ironically I have just done a replica (to a slightly different pattern) of the Six trousers, so now I will get the chance to check out my work against the real thing close-up. I will take a swatch of the fabric I used and compare it.

The viewing is Sunday 14th and Monday 15th June, so I will go on Monday and take some more detailed pictures, particularly of the Doctor costumes.

In the meantime, below is a full list of the items on offer, taken from the online catalogue so they can be seen all together and long after the listing on Bonhams will have been removed.


I have separated the items by Doctor era, and you can see the rest of the items here: 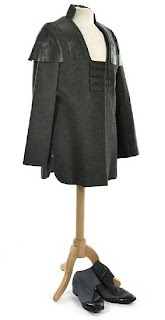 Lot 6
Frederick Jaeger as Professor Marius from Dr Who: The Invisible Enemy, featuring Tom Baker as The Doctor, first broadcast October 1977.
A khaki green jacket, of wool, with leather shoulder patches and raised linear motif to front, labelled inside “Morris Angel & Son Ltd., Theatrical Costumiers, 119 Shaftesbury Avenue, London, W.C.2” and inscribed “F. Jaegar”, together with a pair of black leather shoes with khaki green spats (2).
Footnote:
The Doctor's doctor, Professor Marius, introduces K9 and this series is the first in which the legendary character appears.
Estimate: £300 - 400
Sold for £540 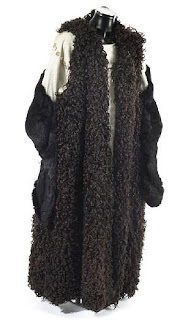 Lot 8
Paul Seed as Graff Vynda-K from Dr. Who: The Ribos Operation series, featuring Tom Baker as The Doctor, first broadcast September, 1978.
A full length robe, of longhair sheepskin, with gold braid and black thread tie, together with a robe, of ribbed satin effect material, having large fur-trimmed cuffs and slit to front, with gold and silver coloured stars to front, labelled inside “Bermans & Nathans, 40 Camden St., London, N.W.1” .
Footnote:
This costume features in all four episodes of The Ribos Operation.
Estimate: £800 - 1,200
Sold for £1,440 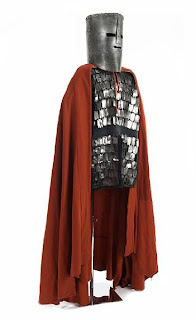 Lot 9
Graff Vynda-K's Guards from Dr Who - The Ribos Operation series, featuring Tom Baker as The Doctor, first broadcast September 1978.
Two guards outfits, each comprising: a metal effect helmet, of plastic, spray painted silver, with applied metal studs, with foam padding headrest inside; a cloak, of red coloured wool, with rope tie to neck; a mail effect tunic, of woven fabric, edged with suede, with applied metallic effect rectangular plates, side fastening with buckles (2 outfits).
Footnote:
These costumes feature throughout the Ribos Operation series, and Tom Baker can be seen wearing one of these costumes during the scene where the Doctor disguises himself as a guard.
Estimate: £800 - 1,200
Sold for £1,680 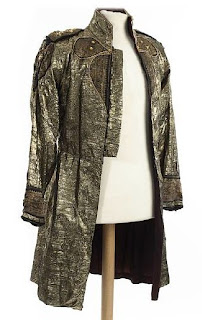 Lot 10
Neville Jason as Prince Reynart from Dr Who: The Androids Of Tara series, featuring Tom Baker as The Doctor, first broadcast November - December 1978.
A gold lamé robe, the fabric with floral pattern heavily decorated to neck with braid and jewels, having high collar, with epaulets edged with black braid and decorated with enamel style panels and jewels, cuffs decorated with black and gold braid, having hook and eye fastenings and burgundy coloured silk effect lining, labelled inside “Susanna Wilson” and inscribed “Dr. Who, Mr. Neville Jason”.
Footnote:
This robe is clearly visible during the coronation sequence of the series.
Estimate: £450 - 550
Sold for £840 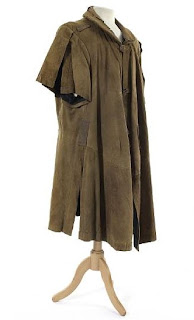 Lot 11
Declan Mulholland as Till from Dr Who: Androids Of Tara series, featuring Tom Baker as The Doctor,
first broadcast November - December 1978.
A suede overcloak, of brown coloured material with buckle fastenings to front, having rounded collar, and black heavy cotton lining, with short sleeves.
Footnote:
The character of Till is the hunchback servant in the episode.
Declan Mullholland also worked on Star Wars when he played the stand-in for Jabba the Hutt, in the since deleted scenes.
Estimate: £550 - 650
Sold for £456

Lot 12
Vampire Guards/ Servants Of The Great Vampire from Dr Who: State Of Decay, featuring Tom Baker as The Doctor, first broadcast November - December 1980.
A guards tunic, of heavy khaki coloured canvas, with large stud detail to front, with artificial blood spatter effect, laced to front and sleeve seams.
Footnote:
The guards can be seen wearing tunics of this type whilst the Vampires prepare to sacrifice the hypnotised Romana.
Estimate: £250 - 350
Sold for £900

Lot 13
Vampire Guards/ Servants Of The Great Vampire from Dr Who: State Of Decay, featuring Tom Baker as The Doctor,
first broadcast November - December 1980.
A guards tunic, of heavy khaki coloured canvas, with large stud detail to front, laced to front and sleeve seams.
Footnote:
The guards can be seen wearing tunics of this type whilst the Vampires prepare to sacrifice the hypnotised Romana.
Estimate: £250 - 350
Sold for £660 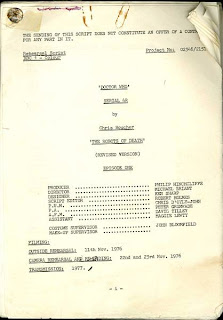 Lot 464
Four “Doctor Who” rehearsal scripts for “The Robots Of Death”, November-December 1976, for all four episodes, each comprising numbered mimeographed pages, with details of cast, crew and sets, together with a short typewritten letter to Hilary Minster from Margaret Lewty, assistant to the director, Michael Briant, dated 14th October 1976 and reading, Enclosed are 4 scripts and a friendly note from Peter. Do hope you'll like the part of S.V.7., and signed.
Footnote:
Hilary Minster (1944-1999) was a British character actor who appeared in a number of classic TV series, including 'Z Cars', 'Tinker Tailor Soldier Spy', 'Secret Army' and ''Allo 'Allo'. He did not take the role of S-V 7, but did appear in two other 1970s 'Dr. Who' stories, 'Planet Of The Daleks' and Genesis Of The Daleks'.
Estimate: £400 - 500
Unsold
Posted by Steven Ricks Tailoring at 08:43